Hey everyone! I've started posting my blog entries to a different address. Let me know what you think of it.

Hey everyone! My book from 2007 is now for sale at Blurb.com (in case you are looking for ways to spend money)! I apologize for the price of the book, but I can't make it much lower because it is print-on-demand and they charge a lot for it. The book includes just about everything from this blog from 2007 (sorry, comments aren't included). Use the link at the top right of my page or here if you're interested in getting a copy.

Book Preview
Posted by Andrew J at 8:45 AM 2 comments: 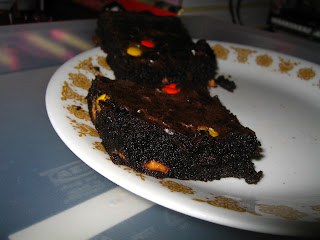 Considering I ended 2007 with a photo of food, I figured it would be appropriate to start 2008 with another one. I made these brownies last night because I was craving them for some reason. I make them from a box and I add reeses pieces. I love my brownies really gooey and these turned out really well. What a great way to start 2008!

Just so you all know, I am considering migrating my 2008 blog to a different website. I'll keep you posted about the details if I decide to do that.

I should probably talk a little bit about 2008 New Year's Resolutions. I'm not really into resolutions, but I've started to think they are a pretty good idea. My photo a day blog was the first new year's resolution I ever kept. I intend to continue this into 2008. I also plan to keep better track of finances in 2008 and also keep the house tidier. Chad and I are giving up television together so we're canceling our cable. We don't watch much anyway so why spend $60 a month on it, right? We could use the time to play games or read or something like that instead. I also hope to eat a bit better in 2008, but I pretty much always want to do that ... 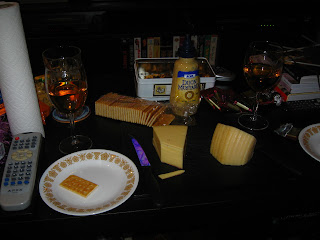 So this is the last post of 2007. I actually took this photo while watching the ball drop on TV (about 20 seconds before midnight). This is how Chad and I ended 2007, with food. Are you surprised? I thought it was fitting to have this as my last photo of the year. It has been a great time and I'm going to continue into 2008. If anyone is interested, I will actually be publishing my entire 2007 photo blog as a book. I will let you know when I have more details about that. Thanks for reading and I hope you've enjoyed. I appreciate all the support and I hope you continue reading in 2008! 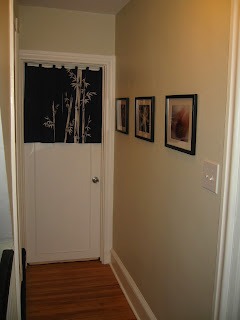 Slowly but surely Chad and I have been trying to decorate our walls a bit more. We have been talking about framing and hanging some of our own photography in the upstairs hallway and we finally got around to it this weekend. We framed three photographs of flowers up close. Two of them are Chad's and one is mine. It felt so fulfilling to finally get them hung.