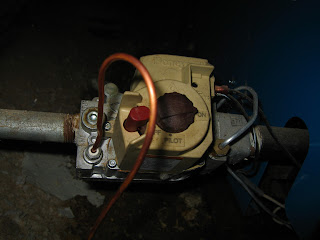 Last year our furnace didn't work when we first tried to turn it on for the winter. It turned out the pilot light wouldn't stay lit because the thermocouple was bad. So we had that replaced and all was peachy. The pilot stayed lit all through the year and when it got cold out again the heat kicked on. Then one day we realized it felt colder than it should in the guinea pigs' room, so Chad checked on the furnace and found that the pilot light had gone out again. He tried numerous times to relight it and it wouldn't stay lit. I had a feeling it was the thermocouple again, but it shouldn't need to be replaced within a year right? So we tried calling out the people who did it last time. Atlas Heating and Plumbing company of Glenside, PA (DON'T EVER USE THEM). They were completely unhelpful and kept stringing me along saying they could come out the next day, then never calling back. So I eventually told them to forget it and we called our parents' heating group. They came out the next day (Friday) and took care of the problem. It was the thermocouple as we expected but they couldn't say why it stopped working after just one year. I'm blaming the other company, so don't use them! Plus they were quite rude to me.