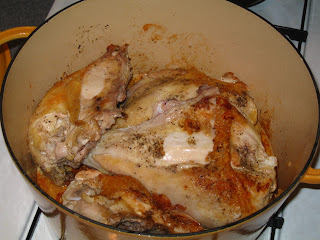 I love the way chicken looks when you brown it in a pan. This is the chicken part of the dinner I made tonight. It was from the first issue I received of my new Bon Appetit subscription (thanks Erin!). Chicken with bell peppers and smoked ham. It had smoked paprika in it, which was very tasty! So far I'm doing pretty well on my new year's resolutions (I decided to try the at least one recipe from each issue thing again). Of course, it's only the second week of the year, but I'm proud of myself so far. I feel like I've started out on the right foot. For today, I figure that I might as well combine the resolutions and post a picture of each thing I make from my magazine.

My last resolution is to stay on top of my school work so that I don't get stressed out around exam time. That is going to be the hardest one for me to do because I have functioned a certain way during my entire academic career (namely, I procrastinate almost as long as possible) and so it's going to be hard to change. This will be one of the things I will just try to improve, rather than go all out and force myself to be perfect at it all year.
Posted by Andrew J at 4:40 PM