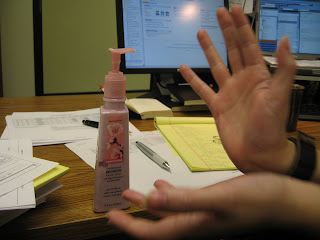 So today Heather decided to try out this new hand lotion she received as a Christmas gift from someone who clearly doesn't know she isn't very girly. Well anyway, Heather had never tried lotion from Bath and Body Works before so she didn't know what to expect. She put the lotion on and started rubbing her hands together. She then said "It's kind of sticky ..." Then she said, "Oh wait, maybe that's because this is soap, not lotion!" and started laughing hysterically at herself. It was awesome. Just thinking about doing that myself gives me the heebie jeebies. It must have felt really weird! Anyway, if you click on the photo, you'll see an enlarged version where it is obviously "Moisturizing Hand Soap" and NOT hand lotion!! Way to start the new year!