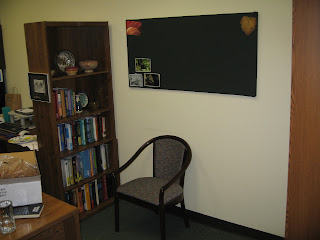 One of Heather's and my bookshelves got damaged in the move from the old building so we've been waiting since then (early October) to get it replaced. Because of that, we never really shelved our books and reports and papers and such in any organized fashion. On Friday we finally got our new bookshelf (it's the one you can barely see all the way in the right side of the photo). We spent a little over an hour taking everything off the shelves, moving them around, and then re-shelving them. I was greeted by the lovely sight of our uncluttered bookshelf area when I got to the office today. It's great! Hopefully we'll keep it this way. I'm thinking about getting some under-shelf lighting from Ikea to put on the top shelf of the one with her pottery. I think that would look really nice.

On a side note, I went to park in the city tonight for class and there were already 29 minutes on the meter so I was pretty excited. I put in a quarter and it went to 44 minutes and I put in another quarter and it didn't change! Then all of a sudden the screen switched to "Out of Order - See Time Limit" That was kind of weird, but it meant I didn't have to pay. Of course, sometime while I was in class it switched back to working so I ended up getting a ticket. I'm definitely going to fight it (I even took a photo of the "Out of Order" image with the meter number and everything so they can't really argue, can they? Photo of the day blog to the rescue (I always have my camera!).
Posted by Andrew J at 7:04 PM